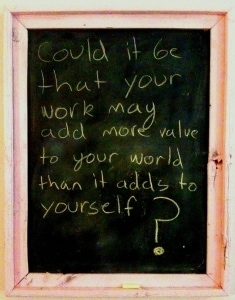 I asked the man, "How much to repair it?"

We ripped out the bar area in our home and needed to have the area carpeted. I had the carpet. He needed to install it and match it up with with the rest of the room.

He gazed at the concrete floor. In less than five seconds he replied, "$175."

Even though it was much less than I expected I reeled back. I bit my lip and looked like I was deep in thought. I turned around to put my back to him for a moment.

I asked, "Does that include the padding?" I knew it did.

I hesitate again. "Okay. I guess that will work."

A friend and I were sharing stories about lost sales and what happened. He mentioned one family he thought was a done deal.

He'd visited with the couple a few times. They bought part of what they needed a few years before. He was going back to finish up the rest of the package. The total sale was about $4000, about 20 years ago.

He knocked on the door the wife answered. She turned to her husband and said, "I guess we need to take care of this and just get the one with our name on it."

Naturally, my friend starts adding up the commission in his head.

They sat at the kitchen table and he went over the options. That was the best buying sign he's heard in a long time. It was a done deal.

After 20 minutes he was walking out the door empty handed.

He looked at me and said, "I lost it because I didn't give them their money's worth. I skipped everything and thought it was a done deal. I gave them $20 worth of 'presentation value' while asking for a $4000 sale."

Give Them A Reason To Value You

The man who looked at my concrete floor didn't make a presentation out of it. While the price was less than I expected, I feel like I paid too much and wish I would've negotiated.

He could've pulled out his measuring tape and measured the area. Scribble some notes on a piece of paper to look like he was adding things up (He could've been writing his grocery list, for all I know). And, made a show of it before saying $175.

Then I would've felt like he put some thought, and value, into it.

Add Value By Creating A Performance

You probably heard the story of a plumber who quickly fixed a boiler with a few taps. After submitting a $200 bill the customer is furious and demands an itemized bill.

The plumber submits a bill that reads:
$1 for 4 taps
$199 for knowing where to tap

Value is added through many factors. These are your responsibility.

The fast plumber will still be paid but will leave the customer doubting the value received.

The fast salesman will leave a customer feeling buyers remorse or walking out empty-handed.

Sometimes creating value involves a little acting. Create a performance your customer will remember. They'll pay for the entertainment.