When I was a teenager, maybe 13 or 14, Penn and Teller had a special on PBS. I saw them on Letterman and loved their style of magic and humor. I recorded the show so I could watch it a few times. At the time, they were the “bad guys” of magic who exposed their secrets. Magic was fascinating to me and wanted to learn more by studying their “secrets.”

On the show, they taught how to “force” a card so you could perform a card trick with your friends. When you “force” a card, you’re shuffling the deck and making it so the other person draws a specific card. Your subject thinks he’s chosen a random card when you’ve actually “forced” the card you want him to choose. Penn & Teller then taught a trick you could do with your friends. I practiced eagerly and grabbed a friend for it the next day. 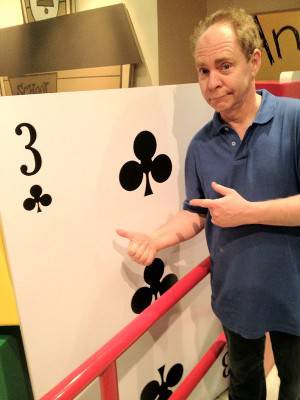 Looking frustrated, you pick a random card (not the three of clubs) and ask, “Is this your card?” Your friend replies, “No” and giggles at you for your stupidity. You repeat this a few times and eventually feign a rejected look. You stop and say, “Never mind. This magic stuff is harder than I thought. Let’s watch TV instead.”In the trick, you “force” your friends to pick the three of clubs (if you’ve seen Penn and Teller, the three of clubs is always the card) from a shuffled deck of cards. You have your friend look at it and put it back into the deck. You shuffle the deck and start look through it, nervously searching for your friend’s card.

When you turn on the TV, you also turn on the VCR so it starts playing a segment you recorded from the Penn and Teller Special. Penn and Teller aren’t on the TV. It’s a female newscaster sitting in a studio desk reading the “news.” She’s handed a piece of paper from someone off camera, stops talking, and looks at the paper. She looks up at the camera and says, “I have some breaking news just handed to me. (dramatic pause) Is this your card?” and she holds up a giant card that’s the three of clubs. I jump up and yell, “Aha!” as my friend’s jaw drops and I quickly turn off the TV so he doesn’t see Penn and Teller come back on from my recording.

Are You Tricking People?

The nagging feeling is what stops most people from becoming a powerful persuader. The art of influence requires a bit of sleight-of-hand. You’re not lying (I hope). However, when you learn the techniques of influence, it can feel like trickery.

It’s About Creating An Experience

As a person of influence, you create an experience. You create pleasant feelings that overwhelm your customer. It’s about knowing your product is beneficial for the person buying, and reducing resistance so your customer can make an educated decision.

I think of ministers working to influence their flock. They use grand cathedrals to make the church and their God seem larger than you. They use language to create fear and desire to motivate you in certain directions. They use persuasion techniques (consciously or not) in ways to get you to believe what they believe.

If you have something good to offer, you should not feel like you’re tricking anyone. Eliminating buyer’s resistance helps your customer lose his emotional baggage and make better decisions. Understanding and using persuasive techniques is not trickery when you’re selling to the right people.

When you get comfortable with this, you’ll be able to move mountains with your words. You’ll help your customer draw the three of clubs and be delighted with his choice. He’ll be telling his friends and thanking you for the amazing experience.

I am in NO way condoning lying to your customer. This is the quickest way to failure. This is about becoming comfortable with the tools of influence to thrill your customers.

Let me know below what you think. Have you struggled trying to influence someone (or writing copy) because you felt like you’re being tricky?