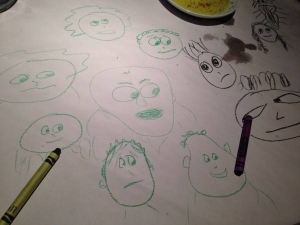 We were at a big chain faux Italian restaurant for dinner. The kids love the chicken fingers, and drawing on the paper covering the table with crayons. I draw faces on the table and make sure they're all staring at my son.

At the restaurant last night, one of the employees dropped some plates. The sound sliced through the low hum of conversations and the restaurant went quiet for a moment.

Then the employees exploded into applause.

A while later, it happened again.

I started talking with my bride and we remembered this same thing repeatedly happened the last few times we visited. In the short time it took us to eat dinner the plates crashed six times!

What does this have to do with Operant Conditioning?

He would put a rat in a box. As the rat searched around the box it would randomly bump a lever. When the lever was bumped, food would drop.

However, you don’t need stickers and money to create or reinforce behavior change. (Money is actually a very poor way to motivate a person, despite what most people think.)

Think of the child who repeatedly misbehaves so mom and dad pay attention. A hug and a slap are both forms of attention. The former is preferred to the latter.

In our crowded, 140 character, everyone’s looking at their phone, fast paced society, attention is hard to come by.

Being acknowledged is huge.

When was the last time you felt someone really listened to what you said?

When was the last time someone told you "good job, you're appreciated?"

When was the last time you did this for someone else?

Operant Conditioning For Changing Others

Do you work or live with someone who does things you don't like? (You probably have multiple people like this in your life.)

Notice their behavioral cues. How are you acknowledging the behavior? How are you possibly rewarding the undesired behavior?

Back to the restaurant.

Each time someone dropped plates they received attention with applause. It wasn't conscious. It wasn't a traditional 'positive reinforcement' where a person gets a sticker or treats. The applause reinforced an unconscious behavior. And, like a kid screaming for attention, dropping plates has become a way to find acknowledgment.

Then, notice the things you prefer the person to do instead. Begin to acknowledge these desired behaviors.

Important: When you acknowledge desired behavior make sure it's not about you.

Don’t say, “Thank you for not putting your papers on my desk.” Thanking the person makes the sentence about you.

Acknowledgement should never be about you. Instead say, “You put your papers on your desk. That must be easier for you.”

The goal is to make them aware you noticed.

It's that simple. That's why it requires patience and practice.

Take a moment and acknowledge someone today. Give a little reward after they bump a lever.

Congratulations, you took time out of your busy day to read this article. Not many people care enough to read something like this. They don't have the desire to improve their life. Be glad you're not one of them.