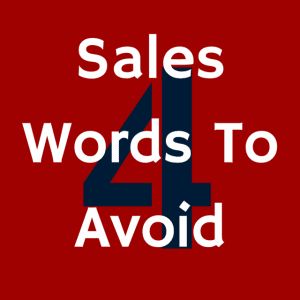 Words are the most powerful tool you have in your business. Throughout history, people have eagerly marched into war and fallen in love because of words. The right words change minds, draw up emotions, and create action.

Here are four small sales words to avoid. These can create tremendous problems when used at the wrong time.

Imagine someone saying the following to you:

– I love you, but your breath stinks like the cat's litter box.
– This product is perfect for you, but I have three things you want to know first.
– You're a smart kid, but you need to work on your math.
– You're doing a great job, but you could improve in the following three areas.

As you read the sentences above, did you notice how the word "but" changes the meaning? The beginning of the sentence, if you stopped reading, feels good, and then you hear the word but.

Being told "I love you" feels wonderful. Then you hear the word "but," and your heart deflates as you wait for the bad news to pour in.

"But" negates what you said before it. It doesn't matter how grand your intentions are, whatever you said before the word "but" is diminished. It loses its luster. You may love the person, but the feeling won't come across as you intended.

Use words such as "and" or "even though" instead.

These will keep your love's heart from breaking. (Well, your love will be appreciated more. I don't know anyone who wants to hear their breath stinks.)

– Don't think about the problems this could cause.
– Don't imagine what will happen if you lose another sale.
– Don't worry about that.

Tell people what you want them to do or think. Don't tell them what not to do (yes, I just used it there).

When you tell someone what you don't want him to do, you're causing two problems:

First, you bring awareness to the thing you don't want.

It's like telling a kid, "Don't jump in the puddle." What's the first thing the kid does? He runs and jumps in the puddle. Your brain instantly pictures what you were told to not think about and begins unconsciously thinking about it.

Second, you're not giving the person specific instructions.

People are lazy. They don't want to exert a lot of mental energy thinking of what to do. We're already overwhelmed with all the daily decisions as it is. When I tell you, "Don't think about your competition," you have to mentally list everything that's not your competition and choose what you want to think about. It's not easy.

So what are you to do?

Tell the person what you want him to do.

This takes a little practice. And you'll be surprised at the significant difference it will make in getting people to do what you want (and feel good about doing it.)

I'm sure you've heard the Star Wars quote from Yoda telling Luke Skywalker, "No. Try not. Do — or do not. There is no try." While it's fun to imitate Yoda and say that, there is deep truth in his phrase.

You can't try and do something. You either do it, or you don't.

You may give your best effort and not do something — however, that's not trying. Because you didn't do it, that is not doing.

How many times have you said, "Tomorrow night? Sure, I'll try and be there," and you knew you wouldn't make it? How many times has someone said it to you, and you thought, "They won't be there?"

You can split hairs about this point. However, think about how many times you hear someone say, "I tried," and it was followed up with "and I succeeded." You can probably count it on one hand, if at all.

In reality, the word "try" is something you do when you fail to achieve the end result. Imagine (don't try to imagine, actually imagine) saying these to your prospect:

– Try and imagine buying our product or service.
– Can you try and find a place in your budget for this?
– I'll try and get you a good deal on these.

Now repeat those sentences without the word try, and notice how much more power they deliver. Now, stop trying. Speak with power and either do it, or don't do it.

The word "if" conveys a lack of belief. You might do something, or you might not. What would you think if I started this post with:

– If you read this entire article, you'll learn something very useful.

If you read it? Maybe you'll read this. Maybe you won't.

- After you read this article, you'll learn something very useful.

Now, that has more strength.

I often hear the word "if" used when asking for commitment, either at the end of a sales letter or when a salesperson wants to close the sale. This is the worst time to use use the word "if." The salesperson says something like:

You come across unsure. You project that you don't know if he will make the commitment. And then you give him the way out.

When asking for the commitment, use the following to show that you believe in what you're doing:


It's kind of like the word try. Tell them what will happen when, during, and after the commitment. You'll come across stronger in your belief (and make more sales.)

What Happens When You Avoid These Sales Words?

You want to move someone from prospect to customer. From unconvinced to convinced. Avoiding these words will make your message more congruent. It will help line up everything you say so your customer feels even better about his decisions.

While the title of this article is Sales Words to Avoid, these aren't sales words. These are more like sales prevention words.

If you only use one or two, will these words kill your deal? Probably not, but it's possible. The wrong word at the wrong time can always cause problems.

Over the next few days, notice how often you use these words. Notice how often others use them. Notice when and how they create conflicts in the message.

That's when you start understanding the power these tiny words hold.