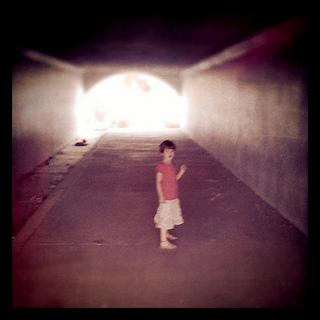 Reality is subjective. What is true and real to you, isn't always true or real to others. We each have a reality tunnel.

This is why there are thousands of religions. It's why political sides can't agree. It's why your wife won't load the dishwasher the right way (Damn that's frustrating!).

If you've spent any time arguing with someone, it's easy to dismiss them as stupid, rude, evil, uncaring, etc. You attack their identity to explain their behaviors. However, like you, they’re stuck in their reality tunnel.

As you grew up you learned many things, consciously and unconsciously. It shaped the way you view the world. You built beliefs and values that you understand as ‘right.’ These shade your experience of the world and reality.

Robert Anton Wilson (his books) called this your “reality tunnel.” It's as though we only look at the world through a tunnel. Your experience of reality is only seen through the opening at the other end and you are blind to everything else that exists.

This isn't always a bad thing. It helps you make decisions easily. You don't have to spend hours making simple decisions because of your reality tunnel.

This is also called confirmation bias.

I'm Right and Your Wrong

What happened in that Connecticut school is horrible. There's no argument that what the shooter did was wrong. Taking the life of innocent people is wrong. To take the life of a child is beyond wrong. I can't even think of a word to describe how horrible and depressing this is (my eyes fill with water as I write this).

Now the debate on gun laws and mental health issues is starting again. Neither side will be right. Both will be wrong.

To try and attribute what happened is more than simple cause-effect. It doesn’t matter.

Political sides will rally people into their beliefs. Both will vilify the other side (Bonding a group is faster and easier to do when you have a common enemy). They build metaphors and stories that set the frames of their reality tunnel.

As they narrow the focus of their reality around one point, we all will lose.

If you think this is a pro-gun control or anti-gun control piece, you are looking at this through your own bias. Always keep that in mind. I don't know the answer but I have my own bias (hopefully I kept as neutral as possible).

I only hope you think about the reality tunnel you have and the ideas of the other side. Notice how they raise or lower your resistance.

More important, think of the families who are spending this holiday in tears, with unopened Christmas presents under their trees this year.

Comments are turned off on this post. I know my bias and don't want to hear hate-filled rants from either side.

I hope this helps you to think. Now and into the future.