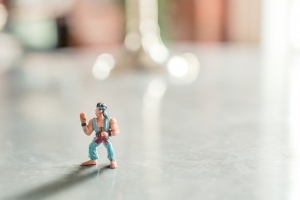 Last week at my kid’s karate class, the experienced kids were sparring.

The instructors were honing their skills to score tournaments. The kids were preparing for upcoming tournaments.

Matched up based on belt level two opponents enter the circle, following the dojo's rituals.

The clock starts and they punch, kick, and block. Some kids came out more aggressive than others. You could feel their desire to win.

One match between two girls ended 8 to 0. They were the same belt level. But one kid was a stronger competitor than the other.

Sensei spoke to the two and gave the loser some tips.

"You were down in points, get aggressive. Stop playing defensively. I don’t care if you win or lose. Win big or lose big. But go out fighting as hard."

Then he asked the loser, "Did you feel like she was more skilled?"

"There’s always someone stronger or better than you. It’s called real life."

And all the parents chuckled because we recognized the truth in that statement.

When you’re selling you have to give it your best.

Always keep in your mind that your potential customer is significantly better at not buying than you are at selling.

If you have something that can truly help then it’s your obligation, your duty, to do the best job you can to help them buy.

You already don’t have the sale. You have nothing to lose.