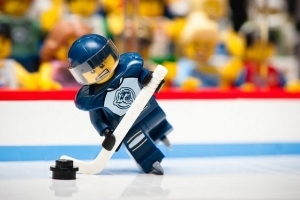 I love that movie. It's hard not to watch it when it's on.

It's about Herb Brooks and how he groomed the 1980 USA Olympic hockey team to win the gold medal.

Years ago I saw Jim Craig, their goalie, speak. He told us stories about Herb. (And when I watch the movie, I think of the behind the scenes stories that never made it into the film.)

The US wasn't expect to win. The Russians were.

The US Olympic team was a bunch of college kids. And the Russians played hockey like an automated machine programmed to win. They were awe inspiring, to say the least.

In the movie there's a scene when the US was playing an exhibition game against the Norwegians.

The US players were on the bench checking out girls. The team was distracted, disjointed, and didn't play like a team.

After the game Herb made the team stay on the ice.

He made them do it again.

While he was doing it he was yelling at the team. How they played horribly. They weren't a team. That they had to get it together or they'll be trampled by the Russians.

The team was exhausted. Physically and mentally beat.

They hated Herb for that.

Jim Craig told us something that wasn't fully explained in the movie. The players were primarily from two rival schools who deeply hated each other: Minnesota and Boston.

When they played on the ice they would rather pass to someone from their school than to the rival school, even when they had a better opportunity to place the puck in the goal.

They didn't like each other and were angry they had to play on the ice together.

That night was the impetus of change.

They weren't angry at each other. They were angry at Herb.

Herb gave them a new place to direct their anger.

Yes, the Russians were the original enemy but now they all complained and feared the wrath of Herb.

As you saw in the movie, when Herb asked, "Who do you play for?" they answered, "I play for the United States of America!"

This brought them together. As a team. As a cohesive group. To look past their rivalry and gave them something to talk about and work together to overcome.

Herb was able to do that because he knew what was best for the team. What motivated them and how to get inside their head.

He was able to put his pride and 'being liked' aside so he could build something greater. They may hate him but they respected him.

And they won the gold.