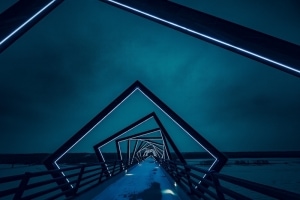 Most Americans think we have a choice for president.

We have a process that whittles down the choice to two people. This is our two party system.

And this year, like many over the past couple of decades, we end up with two candidates who are two sides of the same worthless wooden nickel.

Yet, tell someone you’re voting for them and the response you’re getting is, “You’re just throwing your vote away.”

I’d rather vote for someone I believe in than one of the two turds simply because I like one less than the other.

But that’s the election.

How does this help you sell more?

There’s something called a linguistic bind. It’s often called “The illusion of choice.”

When you ask someone to choose between two items they don’t generally ask for more. They buy into the two offered (just like the presidential candidates).

Salespeople are taught this strategy for setting appointments.

“I’m going to be in your area next week, which would be a better day for me to stop by, Tuesday or Thursday?”

It assumes the appointment and narrows down two options for the client. And both options give the same result, an appointment.

You can use this in almost any situation.

“Will you use the illusion of choice in your personal life first or your business?”

But do me a favor. Give a better choice than our political system has left us with.