"The next moment a hideous, grinding screech, as of some monstrous machine running without oil, burst from the big telescreen at the end of the room. It was a noise that set one's teeth on edge and bristled the hair at the back of one's neck. The Hate had started." - from George Orwell's, Nineteen Eighty-Four

This is how Winston, the main character in Nineteen Eighty-Four, describes the beginning of the Two Minutes Hate. 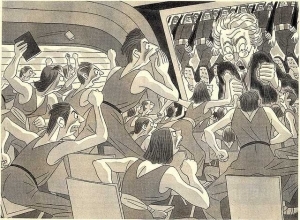 During the Two Minutes Hate the telescreen would show video clips of Party enemies. For two minutes, Party members would see those who wanted to sabotage the Party in various locations and activities around the world.

It's an incredible production. Everyone in the room becomes angered. Rage overtakes the air. Within 30 seconds, people are screaming at the Party's enemies on the screen. Two Minutes Hate lives up to its name.

Winston continues to describe it:

"The horrible thing about the Two Minutes Hate was not that one was obliged to act a part, but, on the contrary, that it was impossible to avoid joining in. Within thirty seconds any pretense was always unnecessary. A hideous ecstasy of fear and vindictiveness, a desire to kill, to torture, to smash faces in with a sledge-hammer, seemed to flow through the whole group of people like an electric current, turning one even against one's will into a grimacing, screaming lunatic."

Most people remember Big Brother from Nineteen Eighty-Four. The Two Minutes Hate has always been the stronger image in my mind.

One of the fastest ways to bond a group is to rally around a common enemy.

Apple did this by attacking Microsoft with their I'm a Mac ads.

Think about the times you've heard coworkers bonding. Are they excited about the new direction your company is heading?

Do they speak with passion about how you're going to conquer the market?

Nope. They're hanging around the water cooler complaining about some change that's going on with the company.

Have you ever heard someone happy about about taxes?

Nobody says how efficiently the IRS collects revenue to fund many things we enjoy in our country. You're complaining about paying too much. Or, how the government is bloated and my tax dollars could be used better if I spent them instead.

On Twitter you'll see social media gurus tweeting something everyone hates and then say, "you're doing it wrong."

If you want to create a common ground quickly, bring up something everyone's against. You know your industry. What do people hate? What drives them crazy? What are the things you do better than your competition?

Find those points and drive them home. You'll build a better bond and a more loyal customer.

And, if you want to find better ways to use this to reduce resistance, get my book Friction Free Sales and Marketing. I show you specifically how to direct your customer's resistance so it's useful for you and helps you make more sales. Get it at at Amazon, or here with a special bonus.