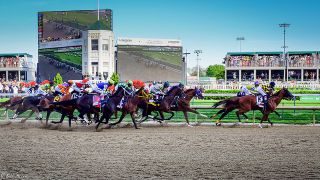 We went to a Kentucky Derby party last weekend. I don't know if party is the right word. Event? Shindig? Whatever you want to call it, a friend gave me tickets to the Turf Paradise Directors Suite to party, watch the races, and wager.

I don't enjoy gambling. It's is a prickly situation. Gambling brings out some extreme beliefs and behaviors in many people. Even someone like me who's conscious of what's going on can get swept away.

It started after I placed my first bet.

I walked up to the cashier and said, "$10 on number 5 to place in the first race." A horse named Undercover Queen. How could I go wrong?

Right after that bet I started thinking about Robert Cialdini's six principles of influence. In his book he tells you about a study on a gambler's confidence of a horse winning the race. When did a gambler feel most certain about his horse winning? After the gambler placed his bet. This is called commitment and consistency.

I didn't have a betting "system." In fact, I had to look up how to bet in the program. My "system" consisted of looking at the program and watching the odds change.

One thing I know about horse racing: it’s a parimutuel betting system. The pool of money gambled is split among the winners, after a small percentage is taken by the house. That means the odds are based on the bets everyone places. The horse with the best odds to win is the horse the masses think will win.

I don't trust the masses. So I looked to the horse with the next best odds and bet on that one. That was Undercover Queen.

Instantly I start to believe my system is pretty darn good and start looking at the second race.

Using the system I just made up a few minutes before, I grab the program to find my next horse. Number 4, Vulcan's Eagle, looks like the horse with the next best odds. I bet again, $10 on number 4 to place.

Two wins on my system.

I feel like the rat who discovered hitting the lever drops the cheese. I go to hit the lever again.

While waiting for the cashier, I notice a silver-haired guy in a Tommy Bahamas shirt. He took a while and made about a dozen bets. I step up and wager $10 on 3 and $10 on 5, both to place.

I dismiss it as part of the gambling process. It's okay because I'm still ahead. The system isn't perfect but I'm 2 for 3. At this rate I'll finish well ahead.

On to race 4. I go to the cashier and the same guy in the Tommy Bahama shirt is making another dozen bets.

I place my bets.

It can't be my system.

Maybe it's because I went to a different cashier than the winning races? Maybe.

I think it's the guy with the Tommy Bahama shirt. He's bad luck. He's harshing my mellow, man.

I go to the cashier from the first two races this time. As I'm placing my bet the guy with the Tommy Bahama shirt steps up to the cashier next to me. Damn it. Damn it! Damn it!!

I walk back to our table and tell my bride about the guy with the Tommy Bahama shirt. She looked at me curiously. I realized how silly I sounded and started laughing.

Do you know anyone who watches their favorite sports team and has some sort of ritual that they think makes the team win? I used to know someone who could only have one beer before the game or else the team would lose.

I had the same crap going on about what was happening with the cashier, the guy in the Tommy Bahama shirt, and the fact I also ate dessert between races 3 and 4.

None of those things had anything to do with the race.

You probably have similar beliefs in your business. Some are good and keep you successfully moving forward. Others stop you from acting.

How We Make Meaning Out Of Nothing

Humans are meaning making machines. We look for meaning in anything and everything.

We make cause-effect links where there aren't any. I can think of hundreds of other things I started thinking about that would help me figure out the winning horse.

You do it in business every day. Your customers do it with the reasons they will, and won't, buy from you.

People buy out of emotion and back it up with logic. The logic is the meaning making. It's the rationalization monkey looking for ways to explain it (justify it) to their friends. It's their reality tunnel.

Step back. Look at what's working for you and keep those. Find those that don't and begin removing them.

Use this to your advantage.